Female genital mutilation (FGM) has no health benefits and the practice can lead to a range of immediate health risks as well as long-term complications.

FGM is not an isolated event in the lives of girls and women; the negative consequences can impact many dimensions of a woman’s health and well-being throughout her life course, including her physical, mental and sexual health.

FGM IS A HUMAN RIGHTS VIOLATION

FGM is recognized internationally as a violation of human rights of girls and women.

FGM IS AN EXTREME FORM OF GENDER DISCRIMINATION

There are many sociocultural reasons why FGM is performed, but regardless of the reasons, the practice reflects deep-rooted inequality between the sexes. FGM sustains unequal gender norms and stereotypes that violate human rights.

One of the key drivers behind FGM is an attempt to control women’s sexuality. This is sometimes related to beliefs that FGM can safeguard virginity before marriage, ensure fidelity after marriage, prevent rape, or preserve a family’s honour.

FGM may also be performed due to a belief that it increases a girl’s likelihood of getting married, particularly in contexts where women gain economic and social security through marriage.

Health risks are not the only consequences of FGM.

While many complications of FGM are less quantifiable than health outcomes, they nonetheless have significant impacts on the lives of girls and women.

A girl or woman’s FGM status can affect how she engages with and participates in society, as well as the way society views her. Risk of stigmatization depends on whether a girl or woman is living in a society where FGM is a social norm or one where it is rejected.

These factors, in turn, can affect her self-esteem, the likelihood of her seeking health care, and her overall well-being.

FGM IS A FINANCIAL BURDEN FOR COUNTRIES

FGM is a harmful tradition performed on girls and women, which comes with direct financial costs associated with the provision of treatment and care to those affected. However, the health burden of FGM would be reduced if the practice of FGM was prevented in the first place.

High prevalence of FGM can cause a significant economic burden to health systems and national budgets, affecting expenditures related to treating acute as well as long-term physical, mental and sexual health complications, throughout a woman’s life course. These costs can span across generations, starting as early as the neonatal period due to increased neonatal and obstetric risks during childbirth among women who have undergone FGM. Child protection systems and legal systems are also burdened by the prevalence of FGM.

Preventing FGM is not only crucial for the promotion of women’s right to health and for improving their well-being. Reduction of FGM potentially also improves women’s and girls’ abilities to participate fully in society, which in turn is a fundamental step towards shaping more just and sustainable communities. By preventing FGM, countries can reduce their expenditures for treatment and care, child protection and judicial services, which may enable them to invest more fully in development initiatives.

The Sustainable Development Goals (SDGs) highlight that efforts to end poverty must go hand in hand with strategies to improve health and reduce inequalities, including gender inequality. The global community has set a target to abandon the practice of FGM by the year 2030 as articulated in SDG 5.3.

While there has been an overall decline in the prevalence of FGM over the last three decades, not all countries have made progress and the pace of decline has been uneven. Current progress in FGM reduction is insufficient to keep up with increasing population growth.

If trends continue, the number of girls and women undergoing FGM will rise significantly in the next 15 years. This will have an impact on the financial burden of FGM for individual countries. There is therefore an urgent need to invest in prevention of this harmful practice.

USING THE WHO FGM COST CALCULATOR TO ESTIMATE THE ECONOMIC BURDEN OF FGM
The WHO FGM Cost Calculator has two primary functions. It estimates the current and projected financial health care costs associated with FGM in specific countries, as well as the potential cost savings to health systems of reducing new cases of FGM.

Questions that the COST CALCULATOR can help answer.

With regards to your country of interest:

What is the current economic burden of FGM?

What will the economic burden be in the future, if the prevalence of FGM remains at current levels?

If FGM prevalence is reduced by X%, what are the expected cost savings related to health care? 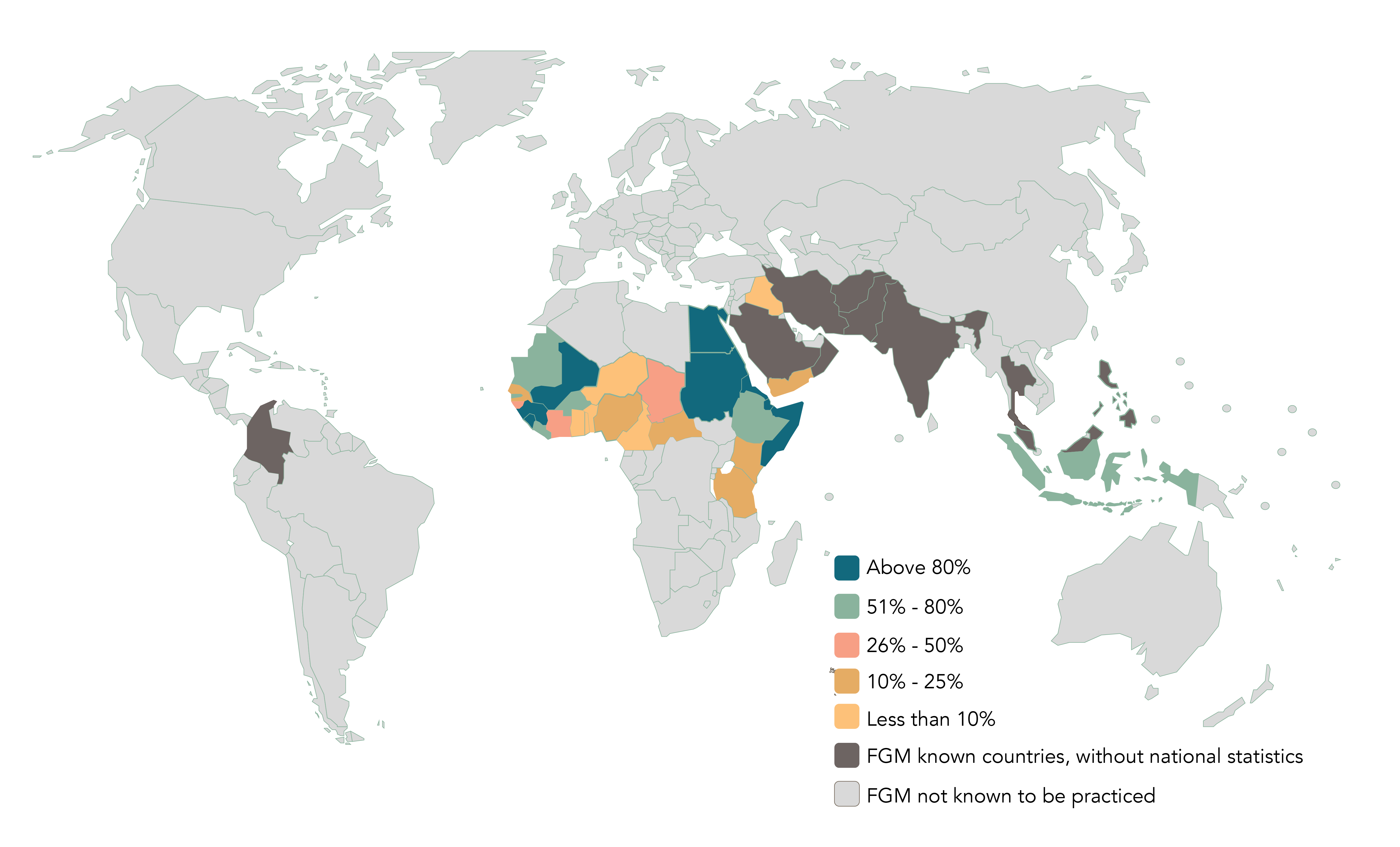 FIND OUT MORE ABOUT HOW TO USE THE FGM COST Calculator, InSTRUCTIONS PAGE

Female genital mutilation (FGM) is a traditional harmful practice that involves the partial or total removal of external female genitalia or other injury to female genital organs for non-medical reasons.

FGM is recognized internationally as a violation of the human rights of girls and women.
There are many health risks associated with FGM which can occur immediately following the act of FGM and/or throughout the life course. These include death, severe pain, problems urinating, cysts, infections, menstrual problems, complications in childbirth, increased risk of neonatal deaths, a variety of mental health problems (including PTSD and depression), as well as negative effects on the sexual health and well-being of women.

WHO has a zero tolerance approach to FGM, and is against all forms of the practice. WHO is strongly opposed to health care providers performing FGM (also known as medicalization of FGM).